Half The Man He Used To Be 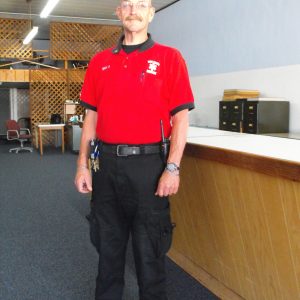 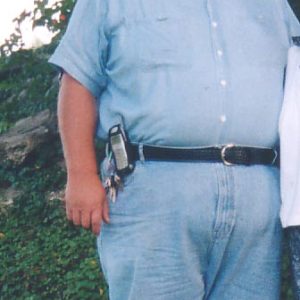 If you live in Knox County, there is a pretty high probability that you are acquainted with Brian Banks. Not only is he a native to Knox, born in Knox City, but also he’s a co-manager for the Knox County Ambulance District and a key component of the Knox County Rescue Squad.

If you don’t know Brian by way of his profession as an Emergency Medical Technician and First Responder, there’s a good chance you’ve seen him walking his two and a half mile route around Edina every day for more than four years. In fact Brian’s daily exercise routine has given many in and around Edina a front row seat to witness him shed a whopping 182 pounds between 2008 and 2010 then keeping it off between 2010 and now. He’s been an up-close inspiration to many who live here and aspire to beat obesity.

According to a report published by the Center for Disease Control in 2007 approximately one out of every three Knox countians is overweight to the point of being classified as obese. The CDC defines obesity as anyone with a Body Mass Index, based on height and weight, being at or over 30, which is about 32 percent or more of body fat.

In 2008, when his journey to lose the weight began, Brian was obese to a point he fell into a category called morbidly obese. He said he’d been overweight since he was six years old and has struggled with obesity most of his life.

“It got to a point when we knew we needed to do something for health wise and mobility reasons,” said Brian. “Really what brought it on was a TV show on The Learning Channel by a guy by the name of Paul McKenna and he had a show, I Can Make You Thin, and it was on for five Sunday nights. We watched and heard what he had to say and it just went from there. We started eating healthy. Whole grains. Lean meat. Fish. Fruits and vegetables. We did away with the cookies and potato chips. That stuff’s not in our house anymore. And exercise. Lots of exercise. Lots of walking. I’ve probably walked 1200 miles a year since I started. Watching that and doing what we did worked for us. Everybody’s different and they just have to find what works for them, stick with it and exercise.”

According to Brian he managed to take off a lot of weight one time before. In the early 1990’s he got down to about 230 pounds. He said he wasn’t able to keep it off and gained all of it back plus more.

“In the early 90’s I really tried to follow a diet plan and it wasn’t really changing your lifestyle, it was just following this plan.” Said Brian. “It’s just a matter of making a lifestyle change and choosing to do that.”

Brian has made walking his two and a half mile route through Edina daily a priority. No matter what the weather or circumstance he never missed his walk.

“A lot of people thought I was crazy,” said Brian.

He admits it was hard to find the time to workout and take his walks when he first started getting serious about losing weight. His job as an EMT meant he was on duty often and had to be available at a moment’s notice to be able to respond to local medical emergencies. Not exactly a lot of opportunity to head out on a long walk and away from his vehicle. But, according to Brian, where there’s a will there’s a way.

“When I was on duty some last year, I would walk and my wife would follow me in the van so if I had an ambulance call she’d pick me up and take me in,” said Brian.

Brian says he counts calories and writes what he eats down. He’s eating about 2000 calories a day to maintain his weight and when he was really losing, he ate in the 1800 to 1900 calorie range. He also keeps a simple exercise log, spends time online learning about fitness and nutrition and he’s eaten breakfast everyday since he got serious about losing weight.

“If we’re going to have beef, we try to get it as lean as we can. We do not fry anything anymore. It’s baked, grilled, something like that. No fryingm” said Brian. “I love salmon. A lot of chicken. Occasionally I eat pork. A lot of it’s what they say on TV and it’s about portion size. I think a three or four-ounce portion is what they say you’re supposed to have and I try to follow that pretty close. Don’t get me wrong we still have the old time stuff. We’ll have it, but we don’t have it every day. You’ve got to watch your portions. Sometimes you go to the dinners and you’re going to have the old time stuff, you can’t get out of it. But the next day we go back to eating what we eat normally now.”

Brian’s mom, Linda, says when her son lost the weight she noticed a change for the better in him.

“There was just more pep in his step and he looked happier,” said Linda.

2012 weighing about half of what he did when he was 45. Like it or not he’s a true inspiration to those of us who struggle with being overweight.

“Everyone is different. It’s just a matter of figuring out what works for you. If you wanna do it you can figure out a way and do it,”  said Brian. “I work at it. I wouldn’t advise people to try to take it off fast. As long as you’re losing instead of gaining, that’s what you want to do. It took me a long time to figure that out.”