FacebookEmail
| logout
By Echo Menges
The steeple of St. Joseph’s Catholic Church in Edina had been a beacon in Knox County for well over a century. According to the church’s historical records it was constructed in 1890. Towering over Edina the steeple is easily Knox County’s highest structure, its highest point an estimated 220 feet from the ground.
The project to repair the steeple and replace the copper paneling surrounding it has been underway since October 3, 2012 when a specialized crew from St. Louis arrived to build the steel exoskeleton like scaffolding surrounding the structure now.
In the weeks following the completion of the scaffolding crews have been working to replace the copper surrounding the steeple and tuck-pointing some of the damaged brickwork highest from the ground.
“Everything high will be done with this round,” said Parrish Council Member Larry Hayes. “Once they get the copper to the top the scaffolding will come down and the rest will be done with lifts. If everything goes according to schedule the scaffolding should start coming down the first week in December.”
The expense of the project is projected to be between a half and three-quarters of a million dollars, which is being paid for by the church and insurance.
“Thank God for insurance,” said Hayes. “We’re also applying for some grant money from the Diocese. Sometimes when you get working on an old building the cost gets to be pretty high. ”
The copper paneling will not be painted and will oxidize naturally. According to Hayes the last time the steeple was redone was about 40 years ago.
“As far as we know it will be in real good shape for years to come. Hopefully we can go 40 to 60 years without having any problems,” said Hayes. 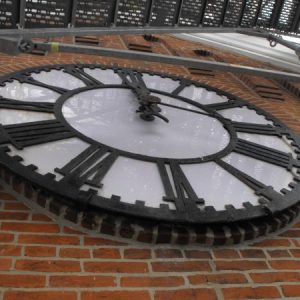 Clock – This is the east-facing clock on St. Josephs Church bell tower just below the base of the steeple. 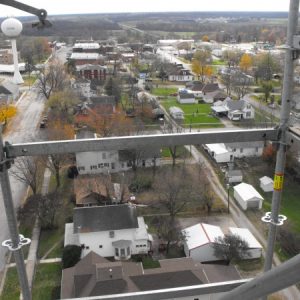 View From Almost The Top – This photo was taken facing south from the scaffolding about half way up the steeple from the bell tower.

Steeple Base – This photo was taken from the base of the steeple showing one of the many platforms crews are using to safely install new copper paneling around the structure. 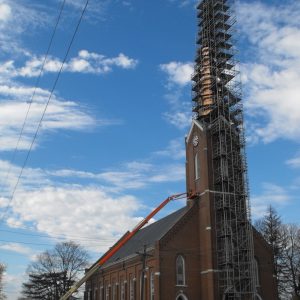 The scaffolding around steeple at St. Joseph’s Catholic Church is expected to be removed in December.

Slight Price Increases to Begin at Clothes Closet in Edina