“It was about three or four miles northwest of Edina on the Santa Fe track. It was just west of Boxcar Loop – between Boxcar Loop and the bridge on Route P,” said Chief Witherow. “There was one car completely off the track and in the ditch.”

At least a dozen firefighters from the Baring Volunteer Fire Department extinguished a rail car that was on fire following the derailment.

“The one that was on fire contained a chemical that was supposed to be non-hazardous, Isophthalic Acid. It was a granular plastic,” said Chief Witherow. “We think part of the tongue broke off of one of the boxcars and went under the car that caught on fire.”

Baring firefighters used water to extinguish the blaze. Foam or other fire extinguishing chemicals did not have to be used on the train fire.

Fortunately, no one was injured in the derailment or subsequent fire.

According to Andy Williams, BNSF Spokesperson, the 91 car train was westbound at the time of the derailment.
“The Freight train was operated by a two-person crew as outlined by FRA guidelines. They ride in the cab, an Engineer and a Conductor. It was a mixed freight train. It carried a variety of commodities,” said BNSF Spokesperson Andy Williams.

Freight traffic was not interrupted by the derailment.

“Traffic is running as intended because there were two lines there,” said Williams.

The cleanup of the derailment is being conducted by private contractors and BNSF employees.

“We expect to have it cleaned up soon. It could be a matter of days,” said Williams.

The Baring and Hurdland Volunteer Fire Departments and the Knox County Rescue Squad responded to the call. 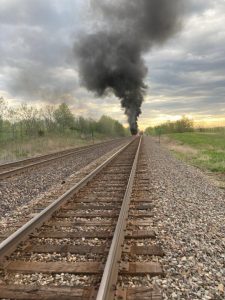 This is what volunteer firefighters saw as they were arriving on the scene of a BNSF Railroad freight train derailment on Sunday morning, May 3, 2020. Photo courtesy of the Baring Volunteer Fire Department 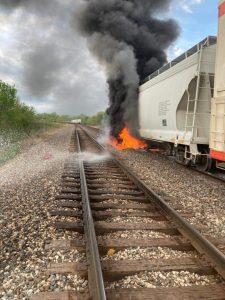 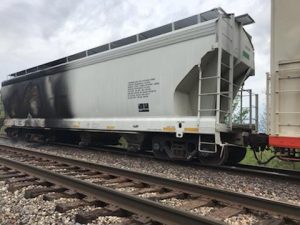 This photo shows the damaged train car after the fire was extinguished. Photo courtesy of the Baring Volunteer Fire Department

This photo shows an object wedged under the car that was on fire. Photo courtesy of the Baring Volunteer Fire Department

This photo shows the boxcar that completely derailed from the track and came to rest in the embankment. Photo courtesy of the Baring Volunteer Fire Department 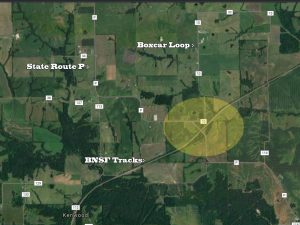 This photo shows the area where the derailment and subsequent fire occurred. Photo by Echo Menges