Knox County, MO – Friday, May 29, 2020 – Details about an arrest in Knox County on Thursday afternoon, May 28, have begun to be released by local law enforcement.

The Missouri State Highway Patrol reported Chad Mahoney, 42, of Lakeview, AR, was arrested on Thursday at 3:06 p.m. for three counts of felony tampering with a motor vehicle in the first degree, felony property damage, felony burglary, leaving the scene of a crash, trespassing, driving while suspended, failure to drive on the right half of the roadway and careless and imprudent driving. Mahoney was reportedly taken to the Knox County Jail following the arrest.

The first caller reported a vehicle crash at the Highway K and Highway EE junction east of Baring. The second caller reported property damage at a residence three-miles north of Edina.

The subject was identified as Mahoney.

According to a representative of KCSO, Mahoney was taken into custody at Burkholder Truck Sales and transported to the Macon County Jail and placed on a 24-hour hold.

According to a representative of the Macon County Jail, Mahoney has since been transferred to the custody of the Columbia Police Department.

According to information provided by the Columbia Police Department, “Case Number: 2020-004302 – On 05/24/2020, at approximately 10:25 a.m., CPD officers were dispatched to the 1200 Block of Bowling St, in reference to a past vehicle theft. This is an active and ongoing investigation. There are no further details to provide at this time.”

According to Sheriff Gudehus, charges against Mahoney are pending in Knox County and Scotland County.

Formal charges have yet to be filed.

The Knox County Prosecutor declined to comment on this case until he has more information about it from local law enforcement.

More information will be released when it becomes available. 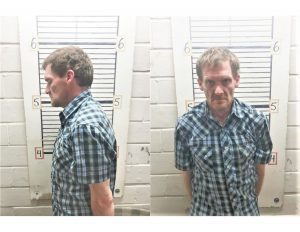