After a long process of shoring up needed and various building permits and approvals, work began on the new Mark Twain Communications Tower in Edina last week, which broke ground on Wednesday, June 10, 2020.

The new communications tower will hold wireless internet transmitters and receivers standing 199-feet-tall. The new tower will take over as Edina’s tallest structure, which is currently the approximately 170-foot-tall St. Joseph Church steeple followed by the 120-foot Edina water tower.

Contractors from Square B, LLC, out of Piedmont, SD, began by drilling three holes to a depth of 36-feet with a massive pressure drill. 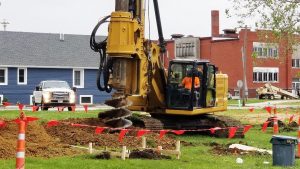 A pressure drill was used to drill three 36-foot holes in the ground on the NW corner of N. Main St. on and E. Clay St. in Edina on June 10, 2020. Photo by Echo Menges

Steel piers and anchor bolts were inserted into the holes before they were filled with concrete from Kirksville Ready Mix. 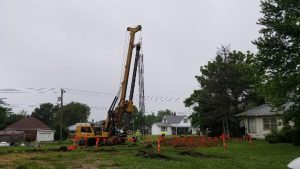 Three 36-foot steel piers were sunk into the three holes in the ground followed by anchor bolts and concrete at the new tower site in Edina on Wed., June 10, 2020. Photo by Echo Menges 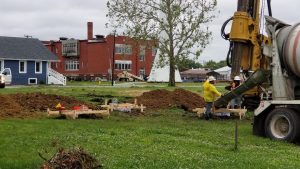 The foundation piers will serve as the underground base of the tower.

The first phase of operation only took one day. The holes were dug Wednesday morning. The piers and foundation bolts were inserted, and the concrete was poured the same afternoon.

Before coming to Edina, the crew worked on a project on Popular Bluff, MO. After their part of the project, the crew departed to work on a project in Watford, ND.