Contributor to The Edina Sentinel and Knox County native Bill Lewis has published a book of stories, “The Edina I Knew”, named after his Sentinel column.

Lewis’ memories of Edina’s days of old is available in paperback on the Amazon website for $12.99. The book was released in May of this year. 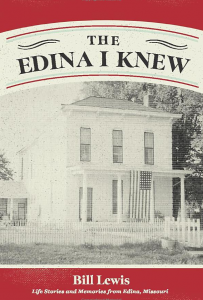 Cover of “The Edina I Knew” 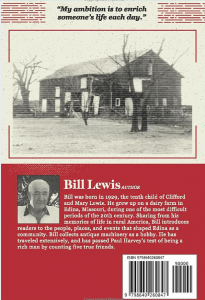 Back Cover of “The Edina I Knew”

Amazon Synopsis of  “The Edina I Knew”

Bill Lewis was born in January of 1929, just eight months before the stock market crash. He grew up on a bottle dairy farm in the city limits of Edina, Missouri, during one of the hardest decades of the twentieth century, the 1930’s. He was drafted into the Army in 1951 but returned to Missouri where he married, bought a farm, and raised four children alongside his wife Cecyle. Bill began writing seriously in 2011, submitting short stories to the local newspaper about his memories of Edina. His recollections of the way of life in small town America, living through the Depression, and the changes that have taken place throughout the decades will appeal not only to Knox County natives, but to any reader desiring to know what it was like to come together as a community through the good, the bad, and the everyday. 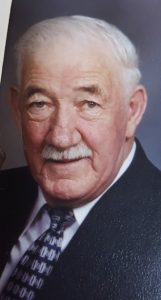