Centralia played one of their few home football games in the last two seasons in week five Clarence Cannon Conference action with Highland. The Panthers unleashed their powerful rushing attack, outgaining the Cougars 338-70 on the ground in a 40-6 Centralia win.

Drew Mallett scored what proved to be the lone Cougar touchdown early in the second quarter on a four yard run. The two point conversion failed for a 22-6 Centralia lead.  Beau Gordon threw a 32 yard touchdown pass for a 28-6 halftime lead.

Centralia scored twice in the third quarter. The Panthers scored on a 67 yard dash for a 34-6 lead. Beau Gordon threw another touchdown pass, this time from 3 yards out. Both point after touchdowns failed for the 40-6 final.

The game was relatively turnover free. Highland turned the ball one time on a lost fumble. The Cougars (4-2) harmed their chances for victory with a 3-11 (27%) third down conversion rate. Centralia was 5-9 (56%) on third down.

Centralia outgained Highland by a 449-233 total yard margin on the night. Highland held a 163-111 passing edge. The teams collected 15 first downs each.

Drew Mallett led Highland with 17 pass completions out of 30 tries for 163 yards. Robert Goehl was 16-40 rushing. Drew Mallett was 7-23 yards rushing with a touchdown. Goehl had five pass receptions for 60 yards. Brandon Holder had four catches for 32 yards. 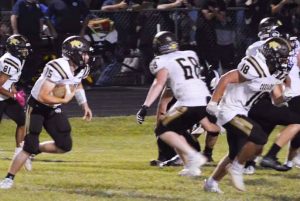 #15, Drew Mallett with the quarterback keeper as Toby O’Brien (#68) and Robert Goehl (#18) set up a block. Photo courtesy of Brenda Mallett.