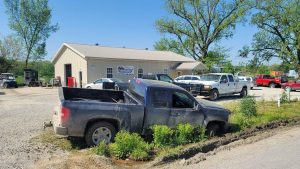 Thieves attempted to steal this truck from the AAA Auto Repair shop in Edina early Thursday morning, May 12, 2022. 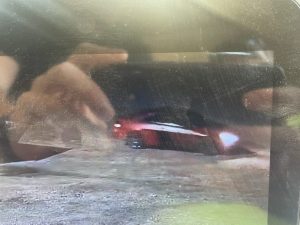 A surveillance camera captured this image of the suspect vehicle in Edina at approximately 2:00 a.m. Thursday, May 12, 2022.

Overnight, two vehicles were stolen from the AAA Auto Repair business on the southern edge of Edina.

According to the business owners, the shop was closed Wednesday night at approximately 9:30 p.m. When the shop opened Thursday morning at approximately 6:30 a.m., it was clear there was a break-in. A window was broken and two vehicles and other items had been stolen.

According to Edina Police Chief Ryan Bishop, a surveillance camera in the area recorded the suspect vehicle, a red two-door sedan with a black spray paint marking, at approximately 2:00 a.m. 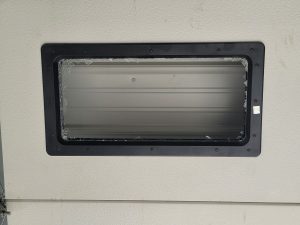 The thieves likely broke this window to gain access to the AAA Auto Repair garage early Thursday morning, May 12, 2022. Photo by Echo Menges

The thieves apparently gained access to the building by breaking a window in the shop’s roll-up door. Once inside the business, the thieves stole all of the keys in the key lock box in the mechanic garage area, and broke into the business office where all of the cash was stolen from the cash register.

“They rifled through all of the cars on the lot,” said one of the business owner’s Thursday morning. The shop owners didn’t know what was taken from the customer vehicles on the lot.

According to a customer of the shop, the thieves attempted to steal another vehicle, which was found stuck in the ditch outside of the shop with all of the windows rolled down. Thousands of dollars worth of hunting equipment and a handgun was stolen. The gun, a Springfield Armory XDS .45 caliber, was loaded with a 14-round magazine. Other guns in the same vehicle were found still inside.

The stolen vehicles included a 2009 white Dodge 2500 truck, which was recovered in Kirksville Thursday morning, and a 2010 dark blue Jeep Wrangler, right side steering wheel, which was recovered Thursday afternoon on a county gravel road in the opposite direction – just west of Knox City off Highway 6 approximately nine miles east of Edina.

The suspect vehicle was also recovered between Edina and Kirksville on Thursday morning in Brashear, approximately 13 miles west of Edina, after being abandoned by the thieves. 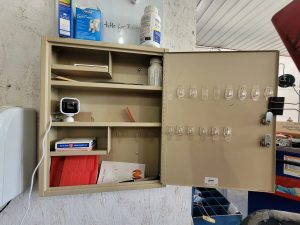 This lockbox was full of keys to vehicles on the AAA Auto Repair shop property before thieves stole them early Thursday morning, May 12, 2022.

The recent thefts could be related to two vehicle thefts in Knox City on May 5, according to the Edina Police Department. Both of those vehicles were also recovered. And, one loaded Glock .45 caliber handgun was stolen.

“We had reports about the suspect vehicle containing three occupants and that three people were seen walking toward Kirksville at approximately 6:30 a.m.,” EPD Chief Ryan Bishop told The Edina Sentinel. “The suspects are known to be in possession of firearms. Citizens should not try to make contact with them and call law enforcement to report any activity.”

Anyone with information about the vehicle thefts in the region, is asked to report it to local law enforcement immediately.