Knox County was able to overcome a strong Paris front line and solid receiver group for their first varsity football win of the season. The Eagles (1-3, 1-2) downed Paris by a 26-18 margin in September 18, 2020 Homecoming Game play.

Senior Conner Hayes went 12-21 passing for 235 yards and four touchdowns. Neither team was able to sustain an effective rushing game. Knox County ran the football 29 times gaining 43 yards. Paris (2-2, 2-0) found themselves in a similar position going 20-47 yards on the ground with a rushing touchdown.

“Paris has some really quality linemen up there,” Knox County coach Bruce Vannoy said. “We are not big enough to just match them up man for man. We were going to have to be athletic.”

“We talked about playing fast and being aggressive,” Coach Vannoy said. “We need to do what we were supposed to do fundamentally. We did a great job of that. Our defensive line did a good enough job that our linebackers were able to flow and make plays.”

“It was fun to see. We can out work them. Play fast, as fast as you can. They did a really good job of doing that all night,” Vannoy said.

Knox County scored on a 70 yard pass play with 9:01 to play in the first quarter. Coltin Morrow hauled in a pass from Conner Hayes. Elliott Ogden ran in the two point conversion for an eight point lead.

The first touchdown was the only converted score in the entire game. Knox County stopped the Coyotes on downs in their first possession. Leo Bounds intercepted a pass, stopping the subsequent Eagle drive.

Conner Hayes hooked up with Coltin Morrow for a 38 yard touchdown pass with 1:47 remaining in the first quarter. The two point run failed, leaving the Eagles up by a 14-0 margin. The first quarter ended with Knox County on top by 14 points.

The teams exchanged defensive stops. Paris took over on their 35 yard line. Reese Barton caught a 40 yard touchdown pass from Chris Ebbesmeyer with 7:08 in the second quarter.

Knox County got good field position when their defense stopped Paris on their 48 yard line. The Eagles drove to the Coyote 20 yard line. Branson Miller caught a 20 yard pass from Conner Hayes with 29 seconds remaining in the first half. The two point conversion failed giving the Eagles a 20-6 lead.

Paris came back with a 48 yard drive for a touchdown. Brock Miller caught a 25 yard touchdown pass from Chris Ebbesmeyer with 6.5 seconds to play until halftime. The two point run failed, leaving the halftime score 20-12 in favor of Knox County.

Coltin Morrow made another play for the Eagles, intercepting a Chris Ebbesmeyer pass on the first drive of the second half. The Eagles turned the ball over on downs at the Paris 17 yard line.

Knox County was able to pressure the Paris quarterback most of the evening. Elijah Ward sacked the Coyote signal caller for a ten yard loss. Branson Miller caught a 55 yard touchdown pass from Conner Hayes with 5:15 to go in the third quarter. The conversion failed for a 26-12 score in favor of the home team.

The score finished a 65 yard drive. Knox County reeled off a 50 yard punt deep in Coyote territory. Knox County was able to stop Paris on downs two more times, for a total of four stops on downs on the night.

Chris Ebbesmeyer ran the football in for a Paris touchdown with no time remaining on the third quarter clock. The conversion failed for a 26-18 lead. Leo Bounds picked off another Knox County pass.

The fourth quarter proved to be a defensive stalemate. Knox County overcame the late first half Paris touchdown, 100 yards in penalties, the normal distractions of Homecoming along with an announcement by the district that the Eagles would transition to eight man football beginning with the 2021 season.

The Eagles had seven players that were part of an unofficial five quarterback sacks. Paris had two sacks unofficially. Paris quarterback Chris Ebbesmeyer was 17-25 passing for 198 yards and two touchdowns along with an interception against.

Paris had 16 first downs and Knox County 15 unofficially. The Eagles gained 278 yards from scrimmage to 245 for Paris.

Knox County travels to Harrisburg for their next varsity football contest on Friday, September 25, 2020 at 7PM.

Tigers Surge in Second Half For Win Over North Missouri Knights 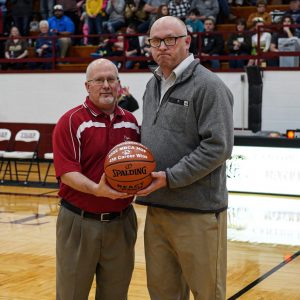